Bored Cook In The Kitchen

As you can see, it’s been a long time since my last post.  Summer was a crazy whirlwind that just flew by for me and now we are almost at the end of September!  Life just got in the way of my postings here.  Thank you to all of you who emailed me to ask if everything was okay.  I’m back to share some delicious recipes with you.

I’ll start by sharing one I know many of you have tried.  If you haven’t tried them, you must!  I’ve seen a number of recipes for these online and I actually have a traditional version of these Jalapeno Poppers I normally make.  The ones that you deep fry.  They are to die for as well, but I’ll share those with you on another day.

This version I used was from Ree Drummond’s book The Pioneer Woman Cooks.  I looked at them so many times and finally this summer I made them for the first time.  Ree is not lying when she tells you how addictive these things are.  I’ve made them several times since, and most recently to use up all the peppers I had overflowing my plants in the garden.

Recipe from The Pioneer Woman Cooks by Ree Drummond

**The reason I put those two ** next to “wearing gloves while working with the peppers” is because I’ve seen many people suggest this when working with hot peppers.  I have never had a problem using bare hands when cutting up hot peppers.  However, I’m probably just not sensitive to them as some people are, so if you aren’t sure or if you know you are sensitive to them, take the advice and use the rubber gloves.

Wash and dry the peppers and cut into halves.  I cut off the stems as well, but you can leave them on.

With a spoon, scrape out the seeds and membrane from each pepper and throw away.

In a mixing bowl with an electric mixer, mix together the cream cheese, cheddar cheese and the green onions if you are using them.

Fill each pepper half with the cheese mixture and set to the side.

Take a piece of bacon and wrap it around each pepper.  Secure with a toothpick.

Brush each pepper with some barbecue sauce.

I place these on a baking rack and cover the sheet pan the baking rack sits in with aluminum foil.  This way when the bacon fat drips you won’t be scrubbing it off the bottom pan.  Just throw away the foil and your job is done.

Remove from oven, allow to cool slightly and serve.

I promise you that Ree is right.  There is no way you can stop eating these things! 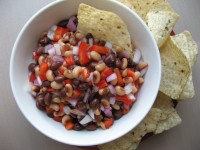 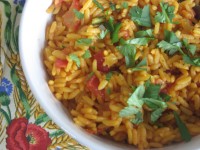 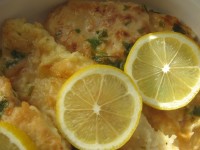 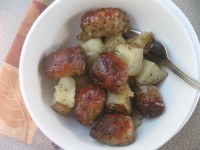 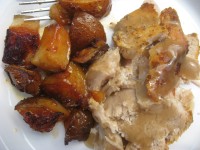 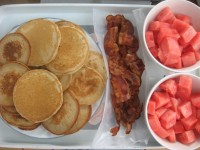 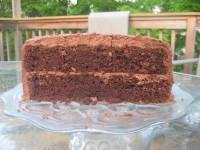 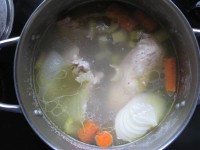 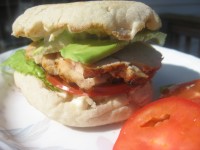